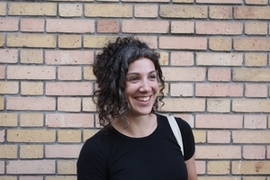 Axelle Grégoire is an architect, graduated from ENSA of Versailles. For five years, she held a position as Project Manager at the Baseland agency's urban planning and territories department, where she worked on the guide plan for La Vallée de la chimie in Lyon and the issue of the rarefaction of fertile land as well as on a strategic vision around the notion of territorial acclimatisation for Montpellier-Métropole.

In parallel, Axelle has worked on experimental research projects between artistic pieces and statements about the city. Trained in various ancient skills (engraving and cabinet-making) as well as digital tools, she develops hybrid prospective tools (cartography/modelling/prototyping) to serve the representation of territories and their rewriting. These transdisciplinary works are reflected in different media: conference-show (Inside with Bruno Latour), collaboration with reviews (Billebaude, DEPLI, CRI), exhibitions (Sol, Ciel, Horizon at ENSA Paris Malaquais) and cooperative games (Third, Sylvarama). Most of these experiments were carried out with SOC (Société d'objets cartographiques), a group co-founded in 2016 whose objective is to produce cartographic tools based on surveys and participatory workshops to test different modes of public involvement and to question our relationship to the living.

Terra Forma, a manual of potential cartographies written and drawn with Alexandra Arènes (architect) and Frédérique Aït-Touati (science historian), continues this reflection on the mapping of the living world by inviting the reader to explore the techniques of representation in various fields, with the aim of gradually and collectively creating an atlas of a new kind.

Recently winner of the 3rd edition of Villa Le Nôtre (international residence of landscape design) at the Potager du Roi for a period of six months (September 2018-February 2019), she worked on the links between practices and imaginaries related to the urban forest.

Within UNIL, Axelle began a doctoral research under the direction of Dr. Muriel Delabarre on this notion of the Forest-City and is wondering about the strength of its reappearance as well as its transposition into the field of urban planning.

Member of the URBAN STUDIES group