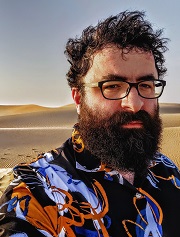 David received his doctoral degree in Urban Studies and Regional Science with honours at Italy's Gran Sasso Science Institute in 2017. He is a Senior Researcher in the Department of Geography and Sustainability at the University of Lausanne, Switzerland. His research focuses on the role that large-scale urban development projects, such as mega-events and cultural flagship institutions, play in cities across the globe. He has research expertise in the cities of Central Asia, and the South Caucasus, and currently developing in the Gulf Region. While primarily relying on qualitative research tools, he recently has also been involved in using spatial analysis methods research, and for the past four years, has developed several large databases for academic research.

At the University of Lausanne, David is part of research team M3 (Materialities | Multiplicities | Metropolis). He is working on the project Cultural Flagships: Pathways, Practices and Politics of a Global Urban Type. In the project, David built a database of cultural flagships around the world with up to 80 variables to draw conclusions about their prevalence, genealogy, context, rationales and outcomes. He is also conducting qualitative research on the Louvre Abu Dhabi and the Saadiyat Island Cultural District in Abu Dhabi by drawing up so-called 'building biographies'. Building biographies involve reconstructing the genesis of a building/object by tracing the multiple relations that have shaped it up to the present day.

Recently, David was a principal researcher at Socio-Spatial Georgia funded by the Rustaveli National Science Foundation of Georgia. The project studied the deeper societal implications of large-scale urban development in Batumi and Tbilisi some fifteen years after their emergence, and at a time when Georgia continues to rely heavily on such projects to boost the economy