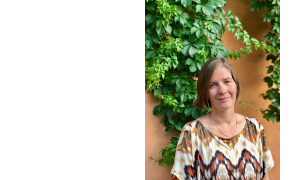 Gretchen Walters is a researcher and practitioner and has interdisciplinary training in the natural and social sciences. She holds a Bachelor's Degree from Ohio University (USA) and a Master's degree from Arizona State University (USA). She obtained a PhD in anthropology from the University College London in 2010 on the human ecology of the conservation of savannas of the Central African Bateke Plateaux.

Since then, she worked at the interface of applied research and practice in nature conservation. From 2000-2010, she coordinated the Missouri Botanical Garden's work in Central Africa, later becoming a research associate of the Centre National de Recherche Scientifique et Technique du Gabon. From 2011-2018, she worked for the International Union for Conservation of Nature, where she coordinated or advised several programs on forests and natural resource governance, with a focus on Africa.

Initially focused on biodiversity, her research later centred on the implementation of conservation projects and the cultural and historic dimensions of landscapes. She focuses on improving conservation practice through working on governance and culture; and understanding historic and cultural landscapes in their political contexts. She collaborates with several conservation organisations and the Government of Gabon. She is an honorary member of the ICCA Consortium, research associate of the Missouri Botanical Garden, and Honorary Staff of the University College London. At IUCN, she is member of the Species Survival Commission, the World Commission of Protected Areas, the Sustainable Use and Livelihoods Inter-Commission Task Force, and of the Commission on Environmental, Economic and Social Policy. She advises on IUCN's Integrated Tiger Habitat Program, the Forum Forestier Lémanique and Aforpolis.